Take a trip back in time, and listen to some of the work of Rob Hubbard.

I’ve always thought that “The Human Race”, was the original title for the Goldrunner title tune, that eventually was renamed, and not a entire game in itself.

The original Human Race music was only using two voices for music leaving a voice open for in-game sound effects where the same tune for Goldrunner, on the Atari ST, uses all three voices and then cutting into the lead voice when an effect is used. A Goldrunner version for the Commodore 64 was never released. 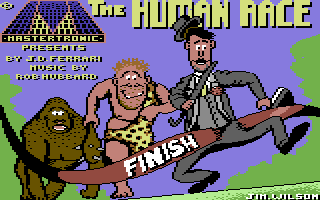 Game music from ‘The Human Race’. Game was released in 1985 by Mastertronic.