Take a trip back in time, and listen to some of the work of Peter Liepa.

Boulder Dash was definitely one of my first computer game addictions. Playing the game today, instantly brings me back to 1985-86. It is true that I’ve played many games before Boulder Dash, on the Oric-1, ZX-81 and Spectrum, before finding the MSX. And even on the MSX there were a lot of brilliant games, but Boulder Dash had an unspoiled charm to it. And it still does. Many of the routes still comes naturally, when the little guy appears on the screen.

I’ve seen many different versions of Boulder Dash on different computer systems, but none is as good at the version on the MSX.

If I had to choose a computer and a game to take with me on a deserted island, the computer I would choose a MSX computer, maybe the MSX 2, and the game would be Boulder Dash – but what good would it do, without power.

The MSX computer was “my first” home computer even thought it was not mine. Both my friends, Peter and Peter, each had a SVI-728 MSX from SpectraVideo. This were back in the days where games were on tape and took a couple of minutes to load. 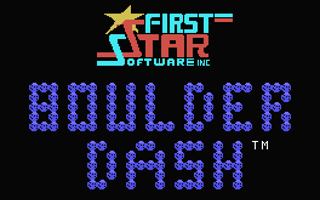 Game music from ‘Boulder Dash‘. Game made by First Star Software and was released in 1985 by Comptiq.